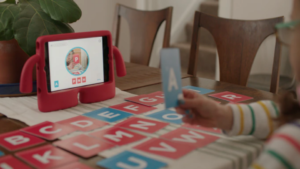 In 2010, Montessori schoolteachers  June and Bobby George were so inspired by Steve Jobs’ introduction of the iPad, that they decided to pour their life savings into into the hands of app developer Y Media Labs to make Montessori-inspired education apps. Those apps very nearly flopped as the pair caught a lot of flak from the Montessori community, and they were on the verge of giving up when they got a fateful email from Steve Jobs himself, telling them that he loved what they were doing and to “let me know if we can help.”

“At first we thought it was a joke,” Bobby George said. But once he realized that it was the real thing, he wrote back and simply told Jobs the truth about what they were doing and the negative feedback they were hearing. Jobs advice back was succinct. “He told us to ignore the traditionalists.”

That advice has paid off for the company. Since its founding, the educational apps created by the Georges’ company, Montessorium, have been downloaded over 2.5 million times. The company also raised $1 million in a series A round in 2015.

Now the Georges have partnered with Y Media Labs again to take another shot at traditionalists. They’re pairing apps and machine learning with an old educational technology: flashcards.

Called Tooder, this “smart flashcard” app utilizes a combination of augmented reality and machine learning to enable kids aged 3-9 to guide their own learning using flashcards.

The way it works is fairly simple: for kids who might be learning, say, the letters of the alphabet, the app (which uses voice technology) might ask the child to show it the letter “Q”. The kid then finds the Q flashcard, shows it to app, which then determines whether the child found the right card. Computer vision and AI are used to identify the card, while machine learning algorithms adjust to the learning pace of the child, determining where she’s struggling and how to improve her learning process.

“The app doesn’t express any judgement on the kids,” said Bobby. “It doesn’t get frustrated and it personalizes the experience for them.”

The flashcards being jointly developed by Montessorium and Y Media include: letters, numbers, continents, animals and more. And the app will do more than simply promote rote memorization – it will also add layers to learning so that kids can take charge of what they’re doing.

For example, in the animals card pack, it might ask a child to show it an elephant. Then it will ask the child if they’d like to learn more about elephants, and provide facts and information about elephants that the child can peruse. Beyond that, it will also be able to show them in elephant in their own living room using augmented reality.

“We’re blown away by the tech possibilities,” said Bobby.